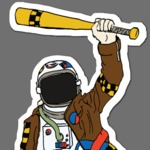 Academic Level at Time of Creation

My two dimensional art has a lot of sharply contrasting values and a sense of humor (and dark humor) to it. My three dimensional work follows the same lines but I also incorporate as much light and shadow as I possibly can.

My influences are mostly based in my childhood and pop culture. Early cyberpunk works like William Gibson and Max Headroom; lowbrow and outsider art like Frank Kozick, the artists of Heavy Metal Magazine, and independent comics; and dark surreal art such as HR Giger, Masahiro Ito, and Heronimous Bosch.

I try to first find art and references that both fit the style of the project and that excite me. Even if it doesn’t quite fit the project, I’ve found that exciting work in various media can fire my imagination. Then I start to sketch, often trying to recreate the parts of my references that got me interested, before getting a rough design for my final work. At that point I just gather my materials and dive in, often like a whirlwind, trying to adjust my final work to fit my changing concepts and the progress of the work. More and more I find that the concept I started with is not the one I end on, and the one I end on is far more complex and leads to a more satisfying work.

I want viewers of my art to feel something beyond just thinking it is well done. I enjoy making a viewer feel a level of discomfort or feel unsettled. My own work springs from growing up with Tourette’s Syndrome and often feeling disconnected or uncomfortable in “normal” situations and I like to try to evoke those same feelings but without being explicit. I also enjoy making a viewer laugh at the absurd, or to be transformative of their space to create an entirely different environment than the one they were just in.

I want my work to express how I feel, but in a way that is applicable to the point of view of others. Instead of making work so personal that it’s impossible to relate to, I want to express my struggles, my interests, and my angers through art and make others feel the same, or at least question how they feel. Even in pieces that are more conceptual, or figurative, I want the viewer to not just know the basic emotion that spurred the piece but to instead feel it themselves.

When I look at another work it interests me if it’s well crafted, but not hyper realistic. I like work that is outside the norm, strange or off-putting. Work that shows the hand of the artist is fascinating because I like being able to see the artist’s process made life, and pieces that make me feel uncomfortable draws me in. In essence, I don’t want to look at work that is just like mine, but I enjoy work that is to the other artist what I want mine to be to myself.

My work has a constant thread of my pop culture obsession. Max Headroom shows up, monster movies, etc. Even when making plaster casts of condoms I viewed the final forms as if they were vintage space ships. Masks also figure prominently in my works, due to growing up with severe facial tics. My favorite heroes and costumes always had face coverings, since they would have helped hide my own personal discomfort.

I’m drawn to trying to illustrate just how bad things can be for others, and my frustration at it. I want to help elevate the person stepped on, but also make the stepper feel discomforted. I want to utilize horror and fetishistic elements more in my pieces both to make viewers feel uncomfortable but also because I feel that sexuality beyond either simple pinup art and LGBT is under-represented other than when it’s the Main Focus. I want to make people feel sad, feel angry, and also make them laugh at the absurd. All at once if possible.

Having been born with Tourette’s Syndrome, and not having it fade away as most do, I’ve lived a life of constantly feeling uncomfortable with daily life. As a result I’ve found that I want my art expresses how I’ve felt my entire life. I want to make viewers feel uncomfortable and like something is very “off”, either as if regular life is somehow wrong or that they’re viewing something that is very much not right. Alternately I want to use the absurd to make them laugh, or to transport them from where they were before they saw my piece. The latter comes from a search for escape, usually through pop culture.

My work has a constant thread of my pop culture obsession. Max Headroom shows up, monster movies, etc. Even when making plaster casts of condoms I viewed the final forms as if they were vintage space ships. When those pop culture references fit, I almost imagine my work to be an amalgam of my days watching old TV shows and reading video game magazines, with breaks only for Nintendo. Masks also figure prominently in my works, due to growing up with severe facial tics. My favorite heroes and costumes always had face coverings, since they would have helped hide my own personal discomfort. I’m drawn to trying to illustrate just how bad things can be for others, and my frustration at it.

My most admired lowbrow artists are Frank Kozick and Vaugn Bode. Both were fearless in their experimentation of form and color and created images that stick with the viewer. Kozik’s work in poster design mixes the popular with the macabre and he could turn even a simple rabbit into a form that is less character and more icon. Bode’s work is more illustrative, but distinct and in a way that mixed comic art with painterly forms. His fearlessness with making jokes about society and sexuality, and explorations of the self are inspiring to me.

“The Ascension of Ernie” was an intersection of all of my interests. I created the sculpture of Ernie and the knife out of EVA foam. I then reinacted an aboriginal rite of ascension to shamanism, using Ernie and cotton candy. “Mr Anxiety Head” was a performance piece where I was tasked with creating something out of cardboard, and so I chose to create a mask to hide myself. Using the interchangeable parts, I got into people’s spaces, studying them and swapping pieces to try to “fit”.

I use black and white whenever possible, and try to rely on bright contrasting colors to draw attention to specifics, such as in my print “Musicians”. I feel that the more morose subjects I tend to work in are best represented in greyscale. I try to show as much of the artist’s hand as possible since the works I most enjoy show that as well, but am working to make sure that roughness has intentionality to it rather than just poor craft. When I work in three dimensions I keep to the same styles, but incorporate light and shadow as much as possible. The feeling of neon, dark streets with bright lights, and cities draw me and I like to recreate those in three dimensions where I can, such as in the signage and projections in “Walled City”.

Though I’m struggling to really express it, I also like to layer discomfort with sexuality. Despite the ever-present threat of the Male Gaze, my social circles after high school were alternative sexuality groups in the fetish community and I want to add flavors of the good and the bad into my work. HR Giger’s work in taking male and female sexuality and creating surreal and horrifying mindscapes were an early influence, and while I don’t wish to copy his style I admire the end results. Masahiro Ito’s fetishized monsters and horror is a more recent influence. Though it can stray into more character design I want to create forms that while not explicitly seeming “fetishized” still carry those subconscious tones. I am eternally fascinated with the intersection of discomfort and sexuality, and of power and powerlessness, plus the undercurrent of the absurd and the sometimes horrific, tugs at something I haven’t quite been able to define in myself but want to, and to help others perhaps feel as well.

My work has an eclectic mix of images, methods, and styles, but I think all of it is definable as “me” since it’s both a way to express my own flaws as well as try to discover a part of myself that I’ve never really been able to look at squarely and see.

This is a general spread of my work to show the scope of both my graphic design work and my studio style art. I chose to hit a balance between the serious (CAM Annual Report, and Not Yet Begun to Fight), the funny and absurd (Life Isn't Fare), and the pieces that straddle the line (Extra Legal!)
I wanted to show work that fulfills my personal opinion, which is that a good graphic designer is at least familiar with and able to work with almost any medium. Layouts, typography, etc are the most important tools to a graphic designer, but they're just the foundation to our work. Being able to sculpt, paint, or even do papercraft allows a graphic designer to add that extra something that shows the difference between an average designer, and a great designer.

This work is licensed under a Creative Commons Attribution-NonCommercial-Share Alike 4.0 International License.